Excalibur, sword of legend, is described as having magic power as will prevent the blade from breaking.  Unlike such myth,  Davis construction offers practical means of preventing separation of hilt from blade.  Perhaps the all time classic evidence of such problem is discovered through study of the Battle of Cowpens, fought during the American Revolution.

During such battle, an American force obtained decisive victory over the British, who were led by the infamous Banastre Tarleton.  Near the end of hostilities, with defeat certain, Tarleton attempted cowardly flight on horseback.  Our Colonel William Washington (George's cousin) chased him down, and while closing in, Tarleton and men wheeled their horses so as to give fight.  What happened next is fit for a movie.  Washington attempted slash, only to have his sword break just near the hilt.  One of Tarleton's officers attempted blindside slash, but was deflected by one of Washington's men.  Another of Tarleton's officers attempted slash, but was shot through his sword arm.  Tarleton then attempted slash, but Washington deflected with his broken sword, causing Tarleton to fire his pistol---but the shot missed, wounding Washington's horse.  Tarleton then resumed cowardly flight, leaving Washington, his horse wounded, sword broken, and exhausted, to bravely claim the field for American victory.   Below is classic portrait of the combat: 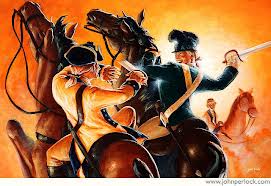 Thus we understand that, regarding fixed blade cutlery, separation of hilt from blade has long been worthy consideration.  Davis' contribution to the art establishes practical solution, and examining the "big red one" explains how.

Below is the "big red one"---my standard field unit, now used for about 20 years.  It is painted red so if it falls off the tailgate of my truck, or is misplaced in thick brush, it's easily found.  Often flourescent marking tape is also applied.  This tool measures 31" end to end, with  brass handle segment 8" long.  The handguard is 1/8" thick, 11/2" wide carbon steel.  The full handguard is very good for preventing brush from crashing into the user's hand, and forms handle for sawing.  The blade is 3/8" x 2" 1095 high carbon, with 23" in front of the handguard.  This unit weighs 51/2 pounds, give or take a little, and has been through about 2000 cuts.  I don't care if it's all skinned up, because it's not how it looks, but how well it works, that counts. 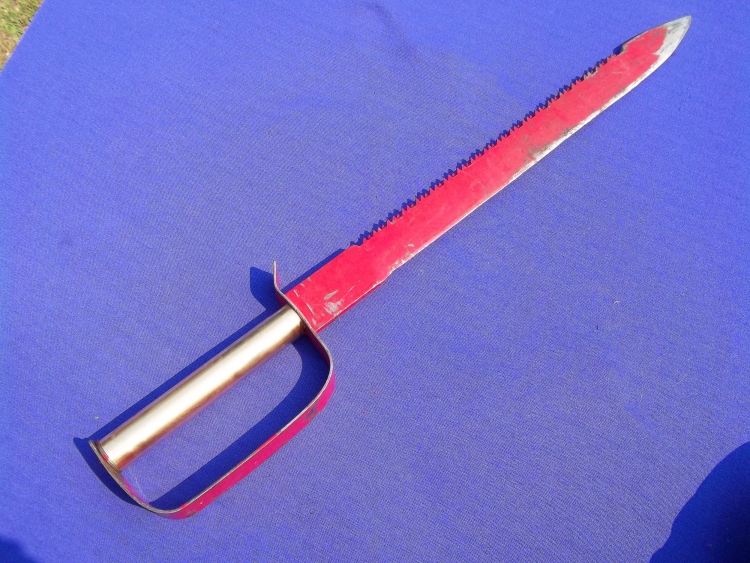 The patented process conjoins modularity with impact resistance---the parts allowing disassembly also provide  blade protection;  all parts serve dual purpose.  SIMPLE disassembly explains how modularity and impact resistance work.  This begins by removing a terminal fastener at the pommel end--- threaded 1/4-28 (fine thread), and 11/2" long, and requires a 7/16 wrench.  With fastener removed, the handguard and segment easily pull away from ricasso, and the handguard conveniently swings down, clear of the grip.  Please notice where tang passes through handguard, after years of use, there is slight deformity. 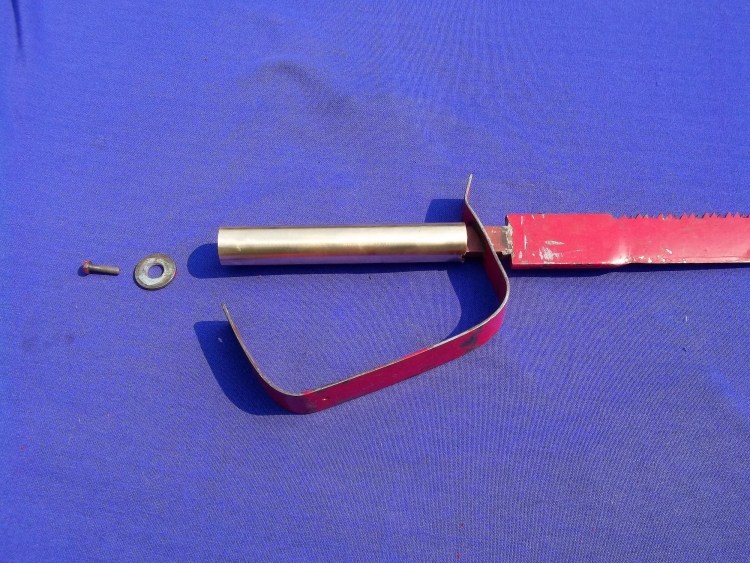 The illustration below, with handguard and tubular grip removed, reveals the clevis, still attached with a 1/4" smooth pin.  Some people call the clevis a "yoke end".  Clevis' are standard hardware, sort of like hinges.  They come in various shapes and dimensions, being used in wide range of application.  The Davis process always uses a clevis threaded 1/4-28 (fine thread), which measures about 21/4" long, made of cast iron.  It is intuitive such arrangement allows tubular grip to pivot on what amounts to an axle (clevis pin), as force impacts the cutting edge.  Depending upon my intent, the clevis pin may or may not shear---and I do not ever shear a pin, and never intended my manufacture to actually shear a pin, whereas in my patent I do in fact state that shear is possible.  That possibility of shear was stated with full anticipation of infringement, and the concept of shear was likewise included in the patent title, so as to maximize legal protection (the patent laws essentially allow for things to be "hidden in plain sight", and Sun Zhu said: "the art of war is deception.")  Once again, as per the photo below, please note slight deformity where tang passes through handguard, AND slight deformity at the end of the handle segment. 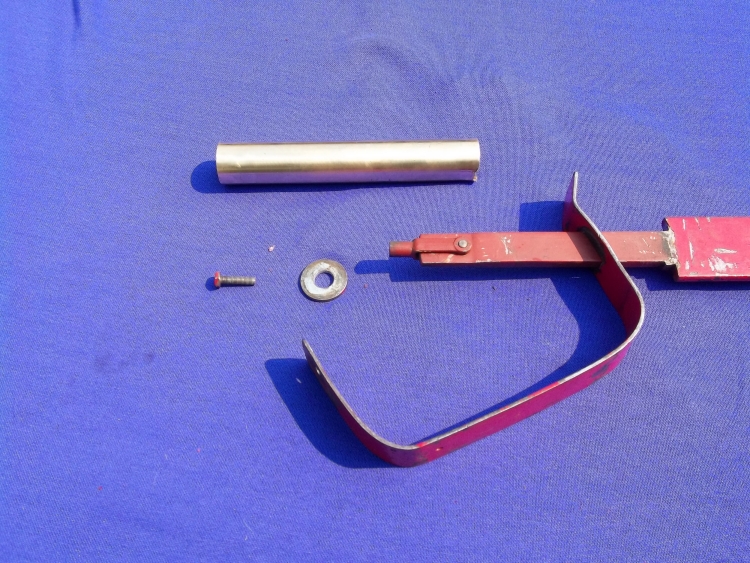 By SIMPLY removing smooth pin, clevis detaches, thus allowing handguard to slide off the tang.  In the photo below, please notice, after years of use and a thousand "whacks", the end of the handle segment is "notched"---that occurs because in use, impact wears the tang against this end of the handle segment, positioned just where  tang joins ricasso.  Instead of shearing the tang from ricasso, the handle segment wears instead, and modularity allows for easy replacement of the worn part.  The same affect occurs if the crossguard is conventional instead of full, and we'll see that the crossguard wears too. 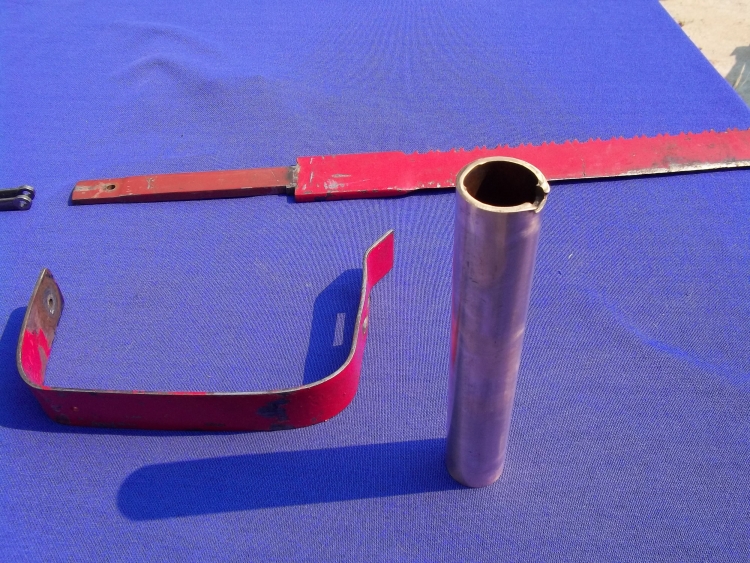 The view below clearly demonstrates how the handle segment "wallows out" an area on the crossguard.  In this picture, you are seeing where the "notched end" of the handle segment presses into the handguard.  This deformity occurs after many years of use, and is once again positioned at the crucial area where tang joins ricasso.  This wear is caused by the same impact which "notches" the end of the handle segment---further protecting both tang and blade.  In other words, shock is transferred from tang/blade, into replaceable parts. 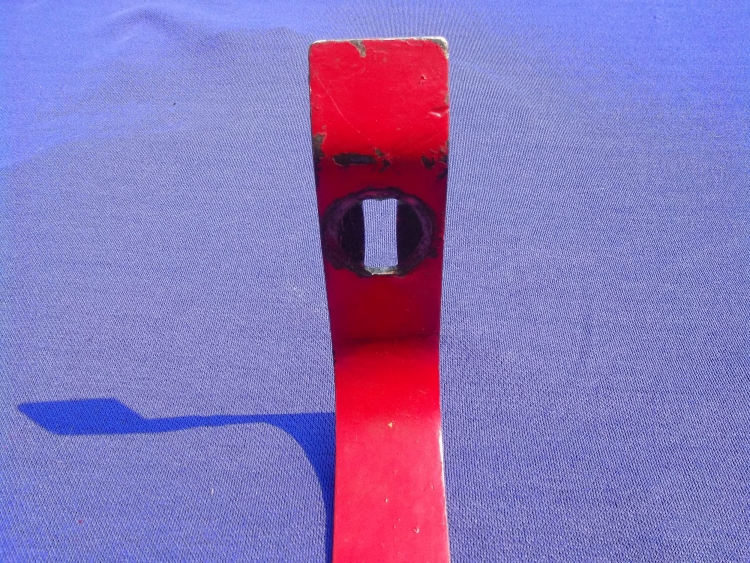 Here's a little better view of wear to the crossguard, caused by impact to the cutting edge.  Remember, in practice, the tubular segment can move about---the clevis which secures the handle grip, pivots on its smooth pin.  In addition to this wear, it is evident in photos above that the handle segment creates somewhat of a bulge in the crossguard, just where the tang passes through.  Once again, this type wear on parts prevents fatigue from building up in the crucial area where tang joins ricasso.  Worn parts are easily replaced owing to modularity, but in practice, if the bulge gets too big, I lay out the crossguard, and whop it good with a three pound hammer---good as new (rarely needs to be done). 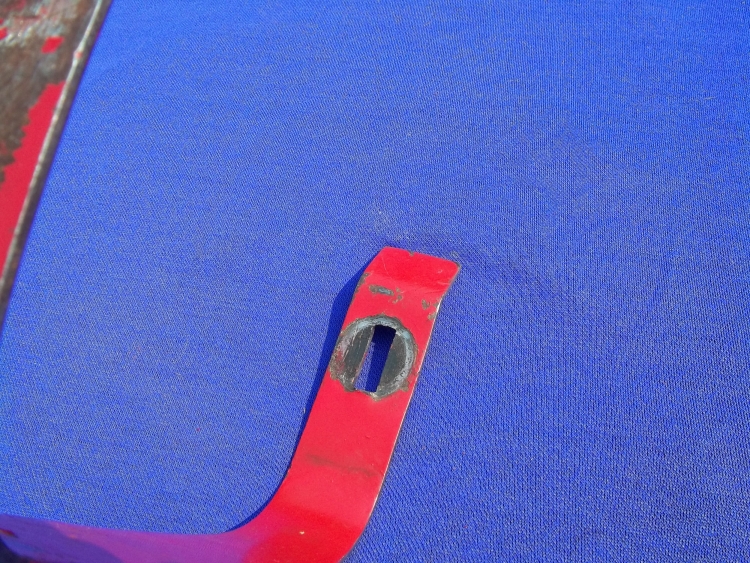 For purpose of illustration, here's the same view we started with---"the big red one" fully reassembled, and somewhat explained. There's actually a little more going on, and the impact resistant/modular concept applies to much smaller dimensions as well. Please realize that when properly assembled, compressive force holds the assembly together nice and tight---therefore, movement of the various components is very subtle. Over the years, I have also noticed the compressive force pushing into the base of the ricasso greatly improves how impact to the blade is processed.  In particular, this "shock" seems to flow out the pommel end, somewhat owing to said compressive force.  This tendency causes the terminal fastener to loosen up, and thus a good crank with a 7/16 wrench is called for on occasion.  The whole process of disassembly you are shown requires about 60 seconds; reassembly is done in reverse, in about the same time.  Changing a flat tire is far more difficult than process shown.

The "big red one" has served me well for many years.  It clears brush, aids construction of sheds, and will even dig your truck out of the mud---one time I hacked the entire end of a house trailer off with it.  There is however, my favorite task of all, as pictured below---in case you're wondering, one good lick is all it takes, and the blade will not separate from hilt. 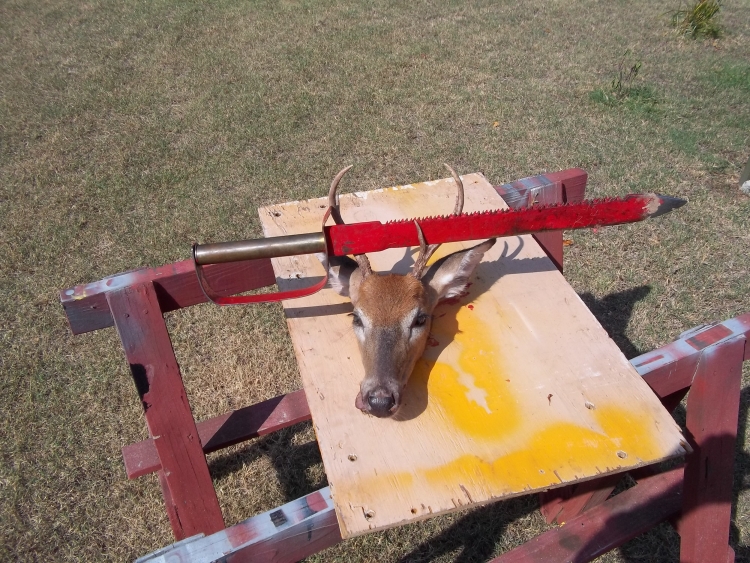