Dad actually spoke quite a lot concerning his combat experience---it always had to be his idea to discuss the subject.  He often emphasized: "I was only one man, there were many more who went through the same thing I did".  Accordingly, since the 24th is herein mentioned, it seems appropriate to reveal some of these other men, as best I can.  All the men below fought with the 24th Infantry Division, 21st Regiment, 3rd Battalion.  George C. Davis was listed in Headquarters Company, 3rd Bn., Demolitions, 2nd Squad, as per November 8, 1950 (special thanks to Ms. Lisa Sholl). Their nickname was "Victory Division", symbolized by a taro leaf.

Almost six million men faithfully served in the Korean War, with well over 30,000 of them killed.  In addition to the death toll, it is reported that well over 7000 men remain Missing In Action to this day. The following link

should provide images of our National Memorial to their bravery and courage.

With regards to these brave men, their first major combat occurred about July 11, 1950, at an obscure place called Chochiwon.  Following is description of what happened:

That morning, again concealed by ground fog, the NKPA hit Jensen's 3/21 in what the official Army historian Roy E. Appleman described as "one of the most perfectly executed coordinated enemy assaults of the war".  In a matter of a few hours the 3/21 was encircled and shattered.  Jensen (commander) was killed; most of the battalion staff was captured or missing.  ONLY 150 OF THE 667 MEN IN THE 3/21 ESCAPED THAT DAY ...later another 172 straggled in (most after many days of extreme privation upon the countryside).  Onward came the NKPA 3rd Division, like a great relentless flood.....the cost to the 21st Regiment was ghastly: of its 2400 men, 1400 were killed, captured, or missing, including Jensen and most of the 3/21.  (Clay Blair, "The Forgotten War", page 114)

667 brave men stood against a communist force estimated at 12,000 strong.  Few if any had ever fired a shot in combat.  They had not a single weapon which would destroy the infamous T-34 battle tanks.  Owing to Truman's budget reductions, their M-1 rifles were worn out relics from WWII.  No calls for reinforcement, artillery, or air support were possible, owing to radios which did not work.

A special online tribute to their commander Carl Jensen may be found at
http://koreanwarmemorial.sd.gov/SearchEngineForm/profiles/69.htm 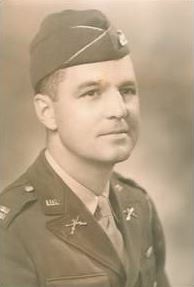 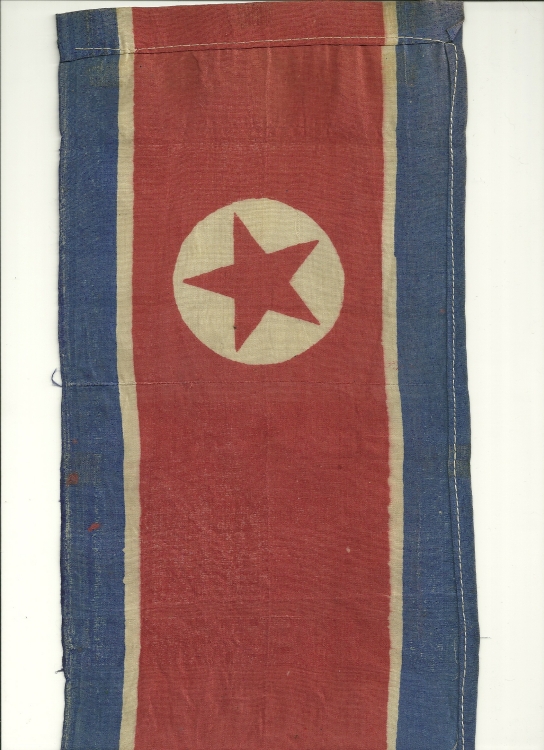 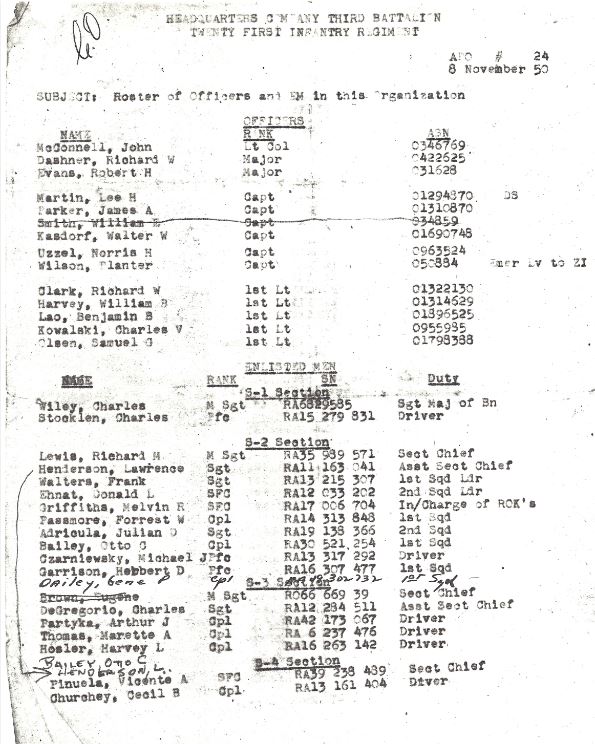 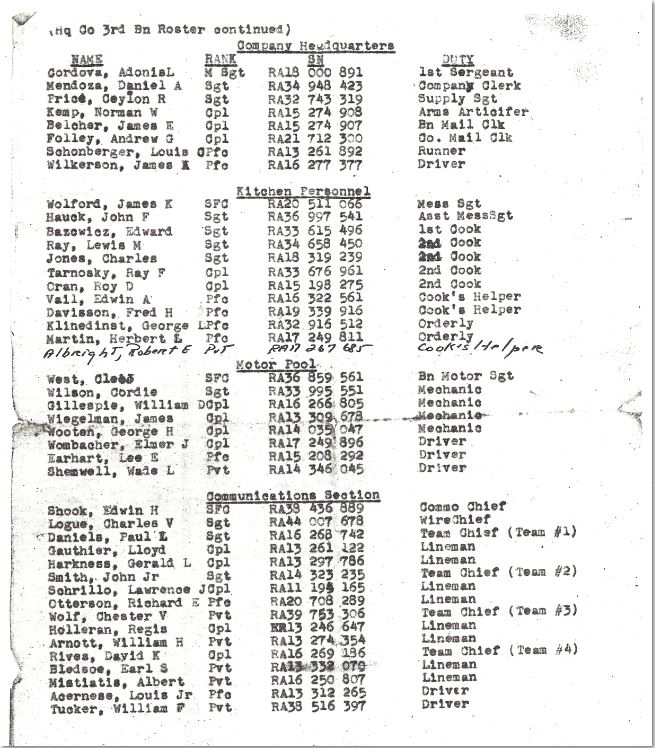 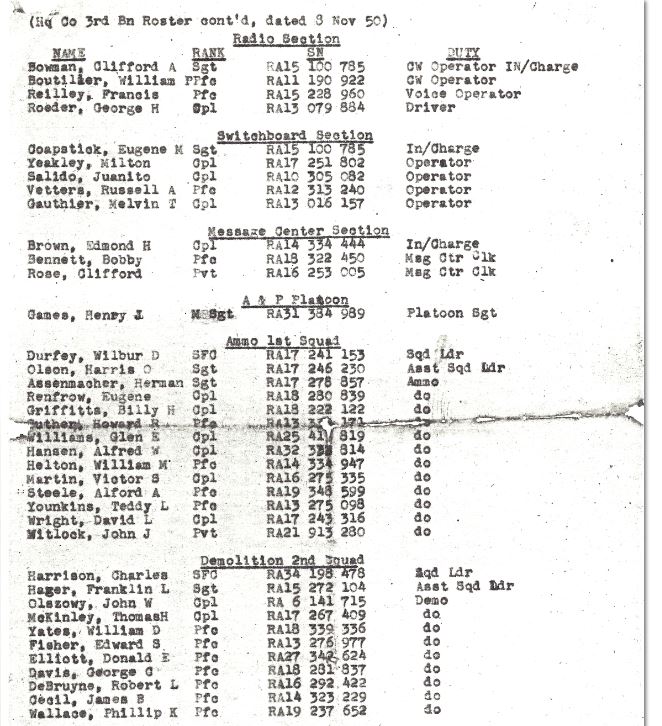 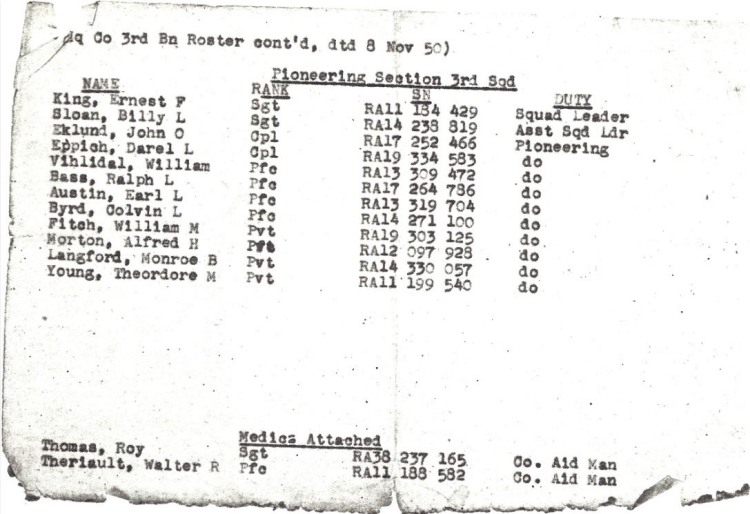 Their legacy forged in steel 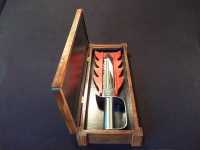 The men below are Captain William B. Harvey (facing), and Lt. Benjamin B. Lao. 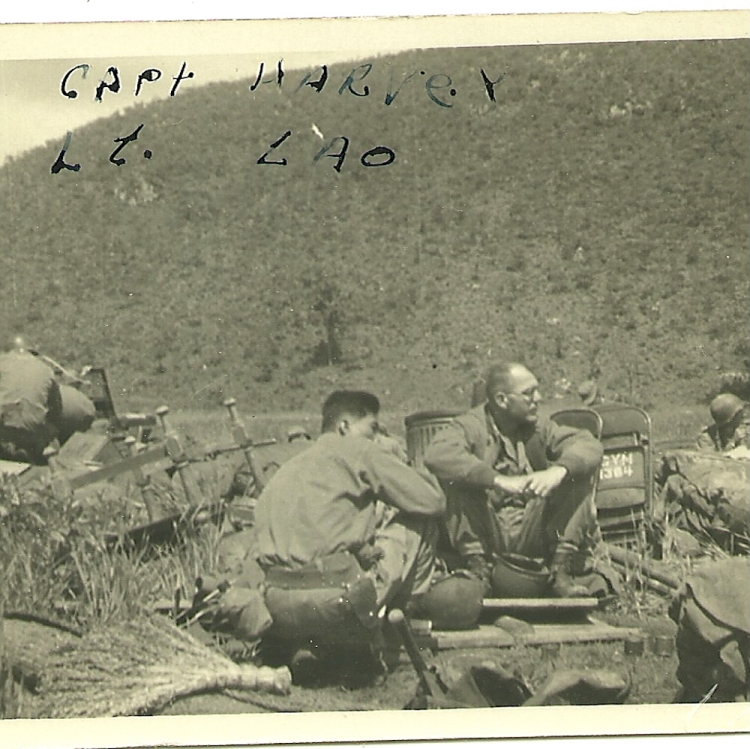 The men below are Lt. Mulane and Master Sergeant Halloway. 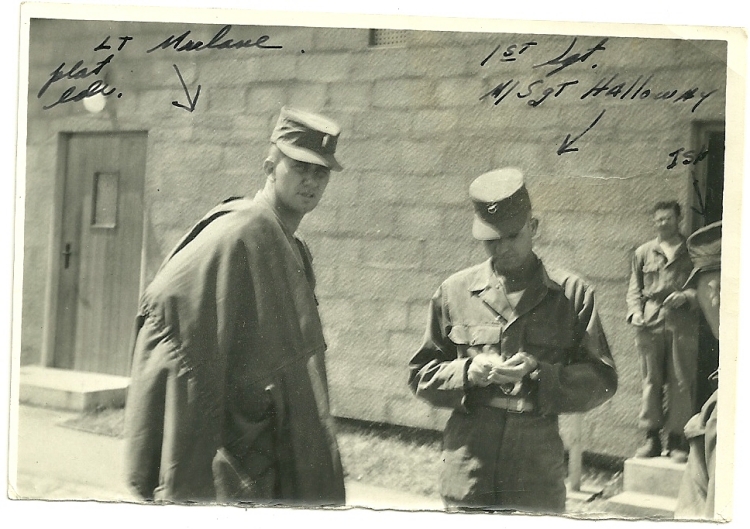 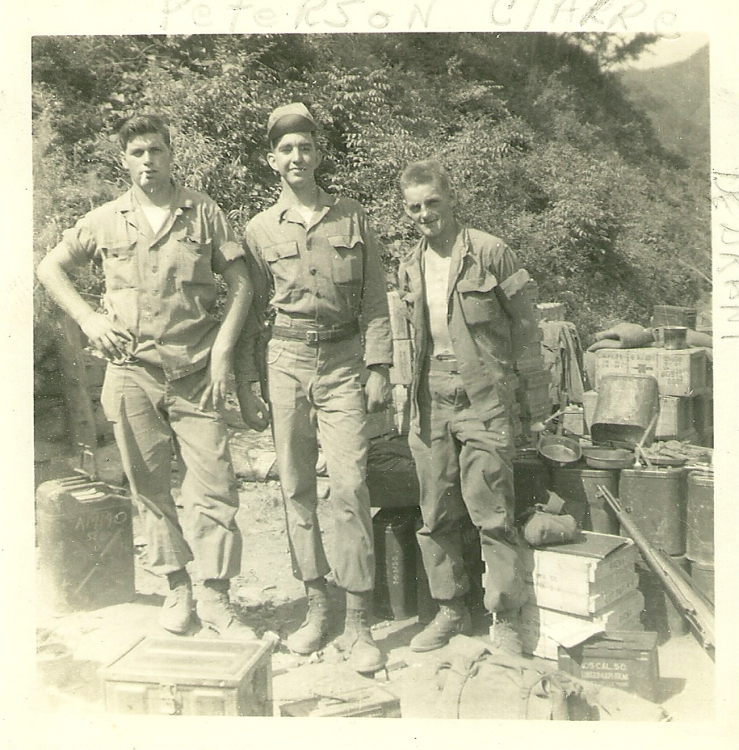 "Mac" (Note: this man's last name is unknown.  Mack A. Jordan was awarded the Medal of Honor about November 1951.) 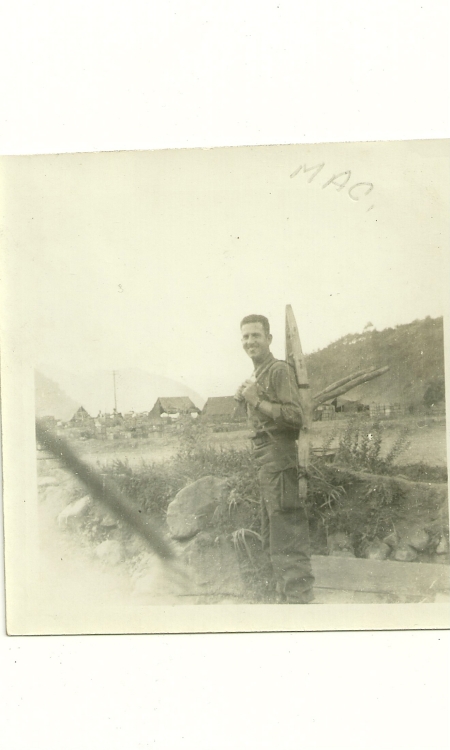 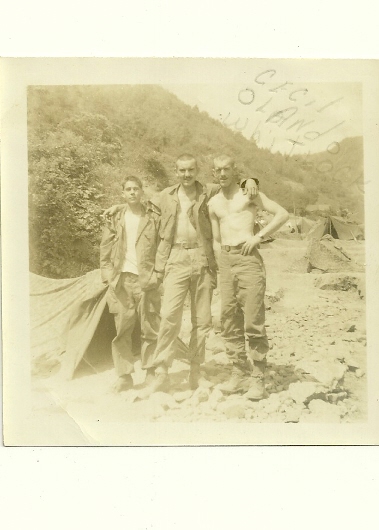 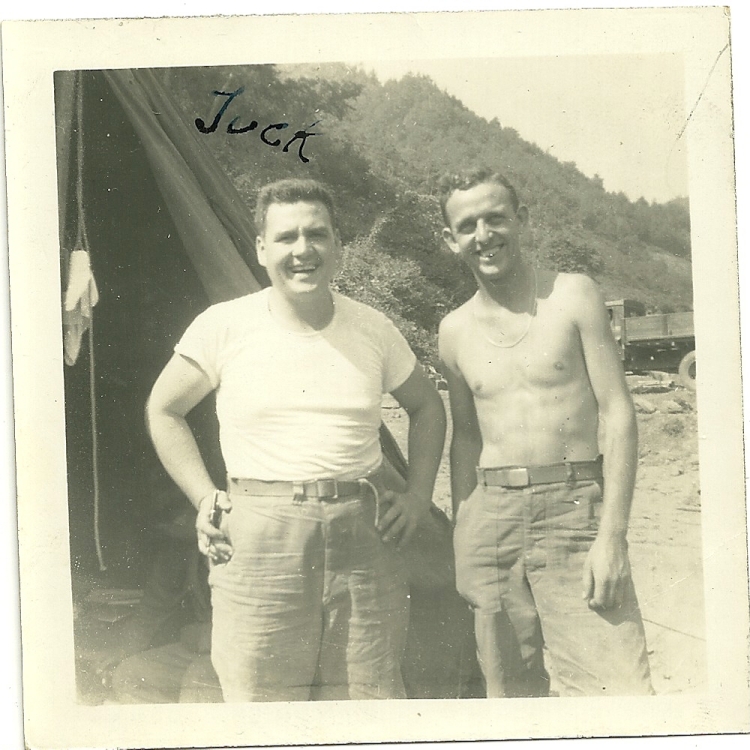 The men below are James B. Cecil & Henry J. Ganes.  The man with hand to face is the squad sergeant Ganes. 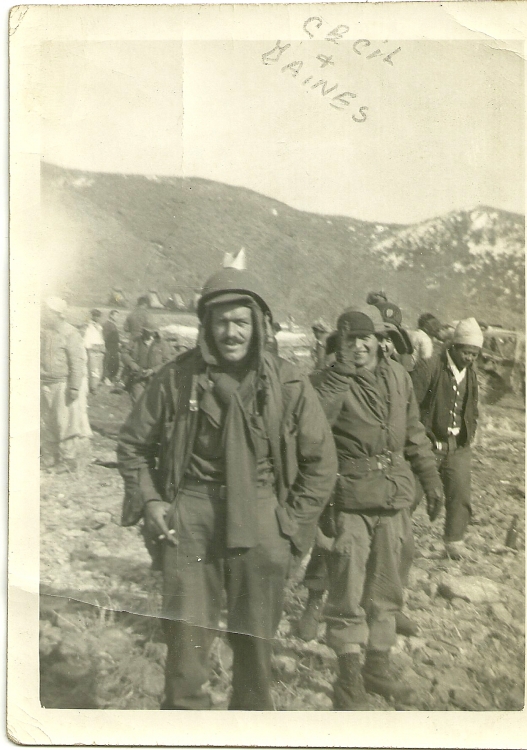 Obviously Pete and Onkosheik.  They found Pete with his hands tied behind his back, shot through the back of the head.  The communist bastards stole his boots & socks:  "after that, we didn't take any more prisoners". 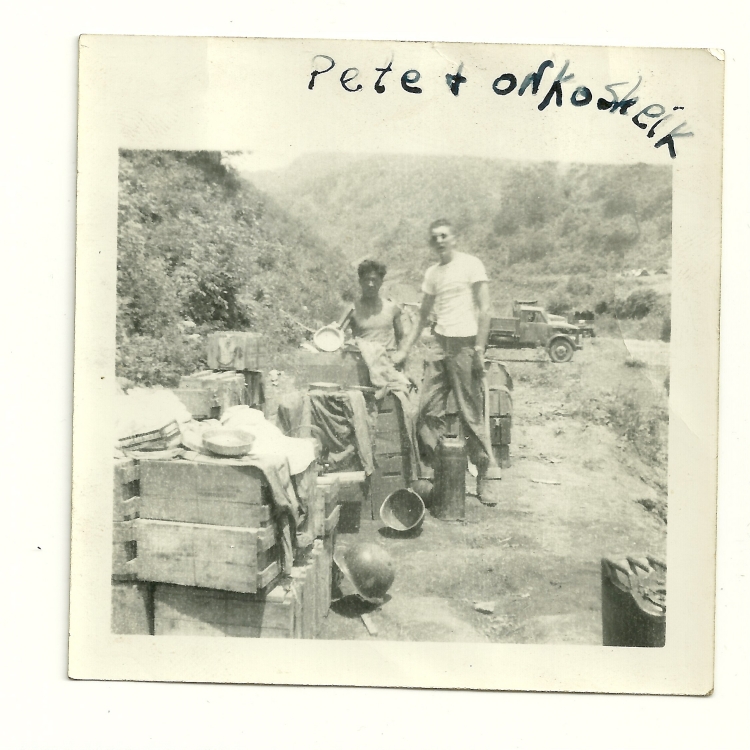 This man below is Theodore M. Young ("Ted"), Richmond, Maine 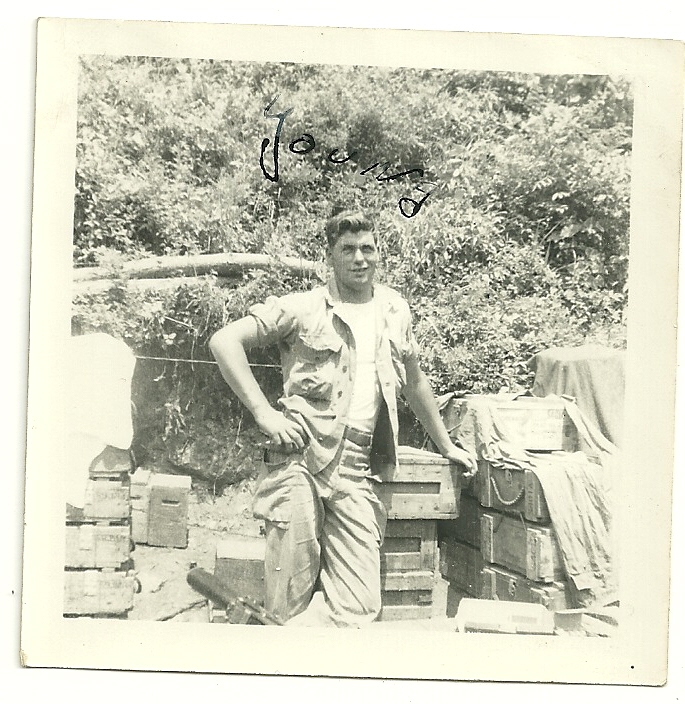 On the back of photo below, it says Herman Duncan, West Virginia 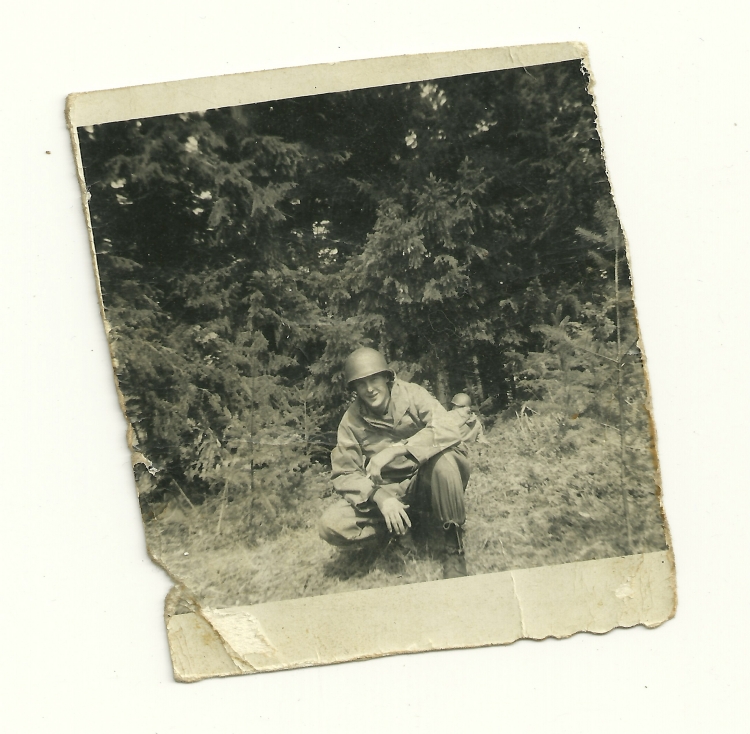 Below is Ralph L. Bass ("Sam").   Terrain of this photo compliments another posted under "Background of the Invention", my Dad throwing a bayonet in particular. 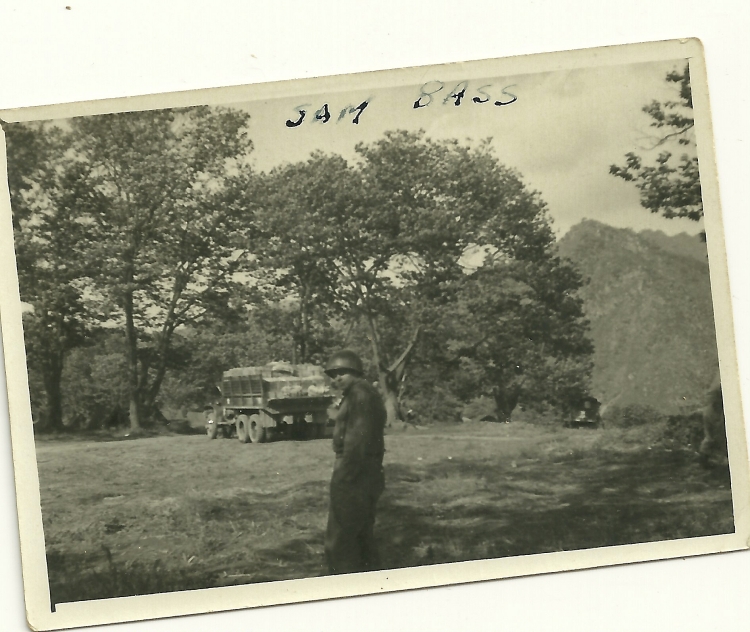 Below, left to right, are James E. Belcher, Grant, & Peterson 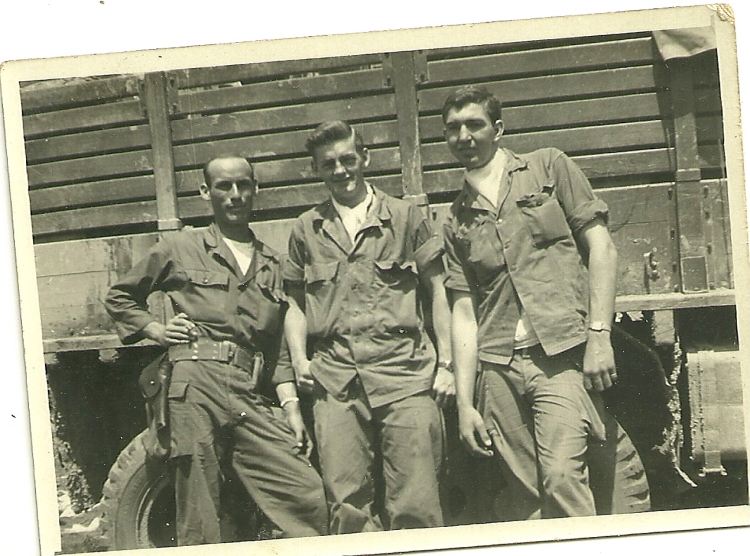 The guy below is Edwin A. Vail. 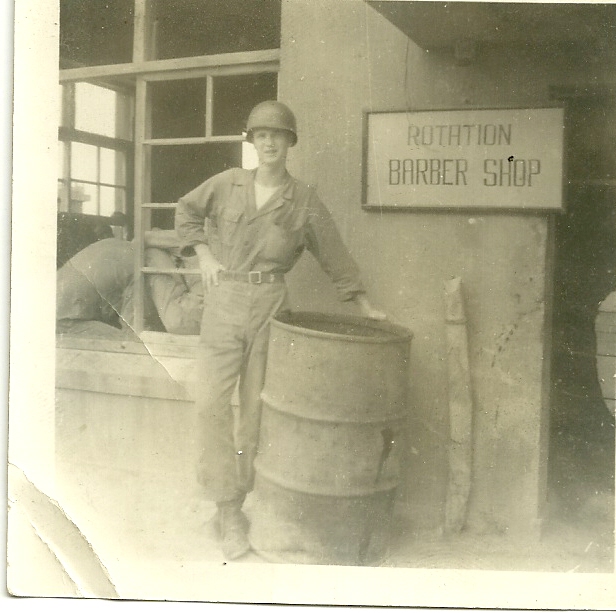 Note:  Mr. John Haven reports this person may be Sgt. Cleo Gerald West, as per roster above. 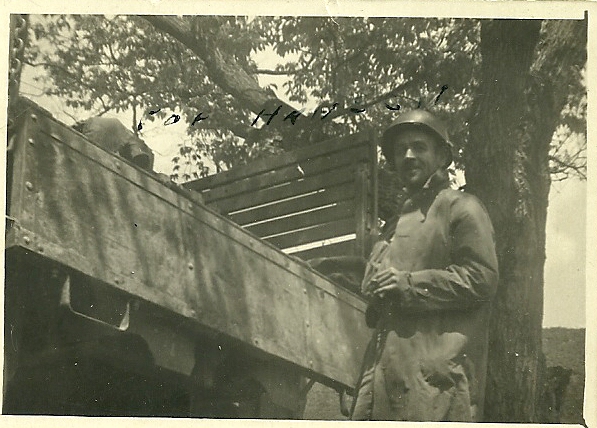 In this final photo, the remains of an American soldier, as found by the men above.  This man was captured, severely beaten, dragged over a camp fire, and left to die.  As with "Pete" (above), the communist bastards who did this stole his socks and boots.  The left hand, placed on thigh, shows an obvious white dot---the bone from his finger exposed, when cut for stealing his ring. (This man was attached to the 19th Regiment, and discovered by those in the 21st; his exact name is omitted for respect of his family, at suggestion of website visitors).   THIS BRAVE MAN DID NOT FIGHT AND DIE IN VAIN, NEITHER IS HIS GREAT SACRIFICE FORGOTTEN. 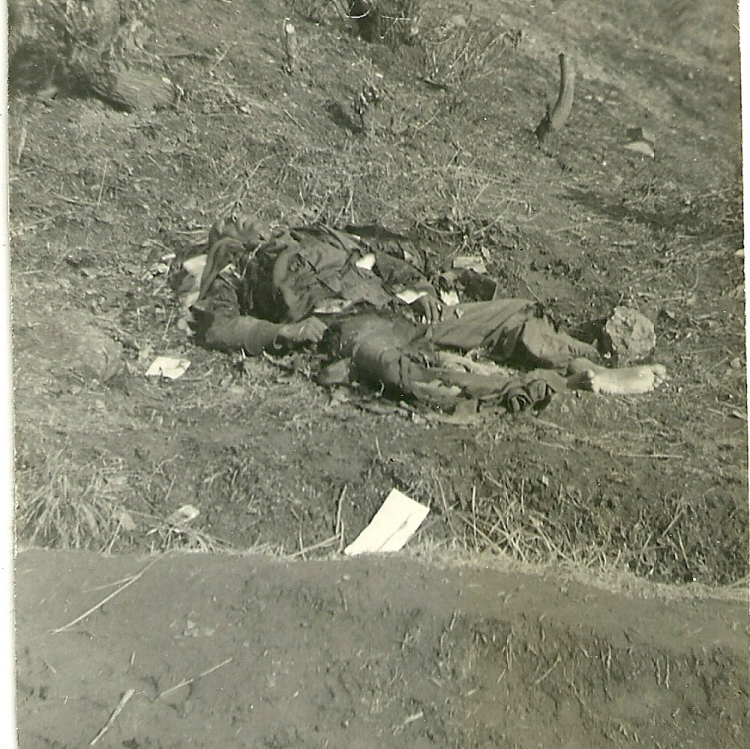 These photographs above are herein presented offering all due respect for the brave men who fought for my freedom.

A Christmas card to home, December 1950 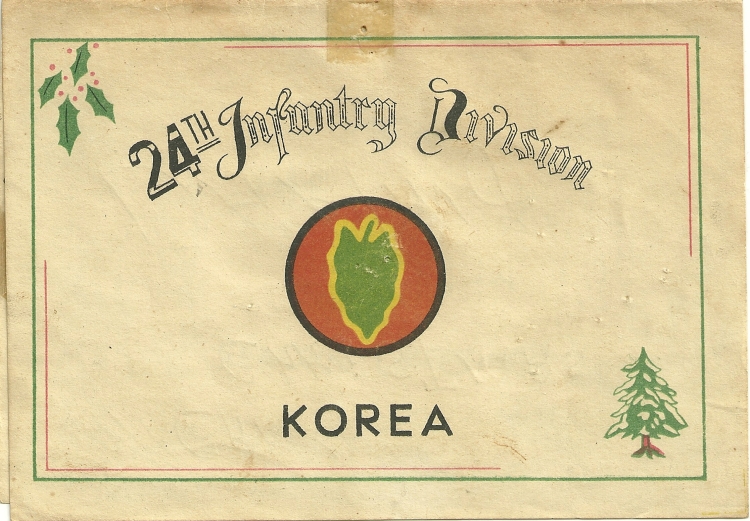 "The white-clad Communists dug in on the rugged hills, resisted Allied artillery and airstrikes and locked the GIs in hand to hand combat"

"Son, when it comes down to it, you shoot him in the back, you stomp him, you bash his head with a rock or a club---you kill him any which way you can, as quick as you can---because you know he will do the same thing to you."  (George Curtis Davis/reflection upon war)

Some of these men participated in the crucial battle of Taejon.  During such event, a Russian T-34 battle tank closed on their position, bringing grim outlook.  To their amazement, the tank was destroyed, and it is most likely 24th Division Commander, United States Army General William Dean, led successful attack--- thus providing their escape.  For extraordinary heroism displayed at Taejon, the General was awarded the Congressional Medal of Honor.  A fuller description of this event is told in the General's own words at the following link, beginning about page 31:

The following link http://www.youtube.com/watch?v=DrkjXBHOY90 provides a thirty minute video, as produced in the 1950's by the U.S. Army, which more clearly describes the 24th Division's combat experience.

The official Army publication below distinguishes the nature of their brave service---the author says of the 24th:  "Its  story will someday be told in the fullness it deserves...".  Please consider this website to be a part of that fullness. 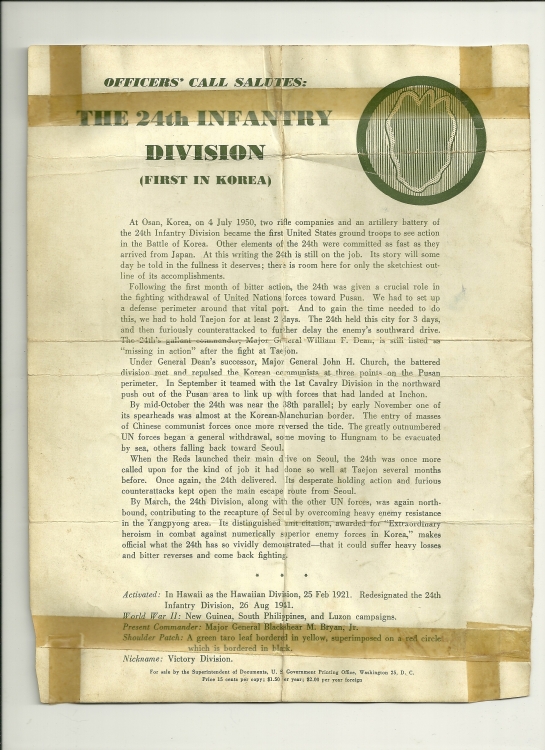